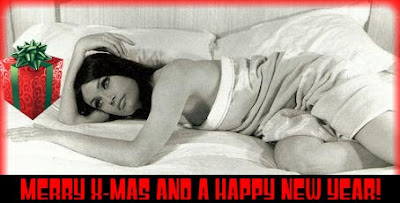 A Butterfly Among Flies! 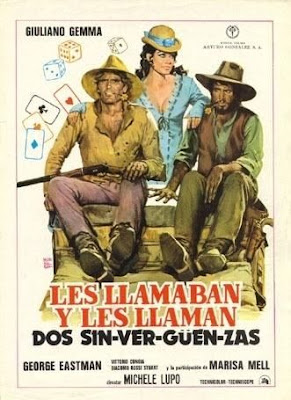 In the hot summer of 1971, Marisa Mell got together with fellow Eurocult stars Guiliano Gemma and George Eastman in Almeria (Spain), under the guidance of director Michele Lupo, to film the comedy western "Amico, Stammi Lontano Almeno Un Palmo" or better known under its English title "Ben and Charlie". The Italian premiere was on February 4th 1972. The story was written by George Eastman under his birth name Luigi Montefiori and his writing partner Sergio Donati. The movie tells the story of two friends (?) Ben and Charlie who are trying to get rich quickly but always stumble on unforeseen troubles loosing always the opportunity to finish the heist or try to trick each other for the stolen money in the end loosing it again. Almost the complete movie centres around those two men except for one segment where the story centers around Guiliano Gemma as Ben Bellow and Marisa Mell as Sarah. 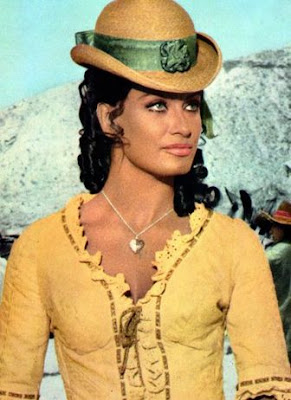 At first glance, this little storyline in the entire movie is just a scene written for Marisa Mell to give her a chance to do her part opposite then Italian super star Guilia 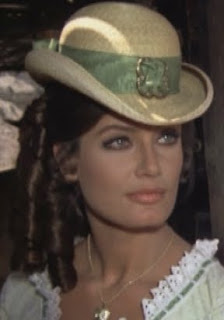 no Gemma. Nothing more than a glorified cameo in anotherwise rather chaotic movie! But after seeing that scene several times the attentive viewer starts to notice that this part of the movie is rather a little movie in the movie superbly played by Gemma and Mell. Marisa Mell as Sarah enters the story in a stage coach on her way to San Diego. She has to wait in the outpost to catch another stage coach with fresh horses. During her wait under a merciless sun, she is noticed by Ben, who recognizes her from his past. At first the couple flirts a little as though they are strangers for each other untill the bom is dropped by Sarah. Ben Bellow is a former lover of her who has left her standing in front of the altar almost three years ago. Sarah confronts him with this fact and mentions that he fears to commit himself in a relationship and is not able to say the words "I love you" to the person he loves! Ben tries to m 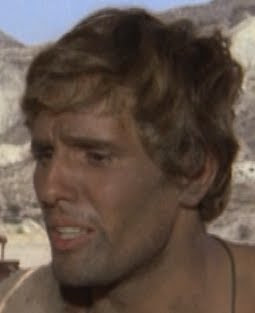 end the still hurt Sarah by telling her that she has done well in life without him when he sees her expensive appearance. When asking what she now does to earn money she coldly tells him that she still is a hooker as when they first met. It hurts Ben to hear this. During the next conversation the couple starts to come together again but before anything can happen the stage coach for San Diego arrives and Sarah has to be on it. By now, Sarah has forgiven Ben for his mistakes and she looks at him with other eyes. She even wants him to have some money she has saved for her stay in San Diego. Ben refuses the money and asks her to wait a few months so that he can fetch her in San Diego when he has struck gold. The stage coach gathers speed and disappears with a stunned Ben on the horizon knowing that he probably has lost the love of his life.

This part of the movie is one of my all time favorite scenes with Marisa Mell because everything comes together in this scene. Let me explain. First the couple meet at a cross road for stage coaches with different directions to take them to other parts of the country. This cross road stands for the cross road of their lives. They were to get married three years ago but Ben got scared and left Sarah at the altar. Now he has the opportunity again to fix his mistake. She has the opportunity to forgive him for that mistake. When they can surpass themselves they can be together again because it is clear that they are still in love with each other. Sarah is able to forgive him for his mistake symbolized by the money she is willing to offer him so that he can have for a short time a decent life. In other words, Sarah values Ben again which is represented by the money she is willing to give him. Ben on the other hand is still fighting with himself. He has to choose between a stable life with Sarah on one side and a life as a gold digger and gambler on the other side. What will he choose? Sadly he comes to late to the conclusion that he wants to stay with Sarah, destiny in form of a stage coach decides for him. He has lost her again and Sarah leaves the cross road of his life again, probably for ever lost to him. This is a very well written scene by Luigi Montefiori and Sergio Donati. Not only that but the execution of that scene by the director Michele Lupo is also first class. He uses a lot of close ups so that the viewer can see first hand the reactions of both protagonists. The hurt, desire, longing and finally the disappointment that they have failed again and that life will take them again into another seperate direction. Lupo also uses a lot of shots and counter shots to point out the difference between both. The original soundtrack by Gianni Ferrio, and especially Sarah's Theme with it's sentimental overtone completes the whole scene. Once you have heard that theme you'll never forget it! 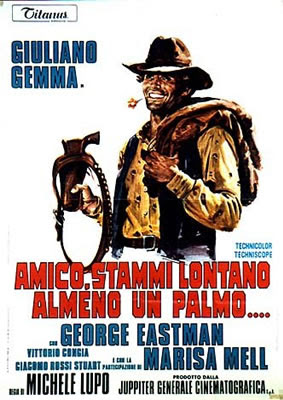 And then there is the appearance of both characters to show the audience that both people are complete opposites of each other on every level. And that is a long list. Here we go: Ben is male, Sarah is female. Ben has short blond hair, Sarah has long dark brown hair. Ben has a red shirt, Sarah has a green dress. Ben's shirt has holes in it, just like his life of failures while Sarah's dress is as new as just bought in a store. Ben has a short red ribbon around his straw head, Sarah has a long green ribbon around her head, even more Ben's head is more the straw head for a girl while Sarah's head is almost a bowler head for a man indicating that she is decisive in live while Ben is undecisive like a young girl who does not know what to do with her live. Ben has a leather ribbon around his neck, Sarah has a silver necklace with heart shape pendant covered with diamonds in two color gold, white and yellow. This necklace indicates that Sarah has a torn heart and is a torn women. And so to my belief, Ben and Sarah could never have come together. They were just to different to connect. Sarah says it best during this scene: I am a butterfly among flies. And that makes this scene one of my favorite Marisa Mell clips! 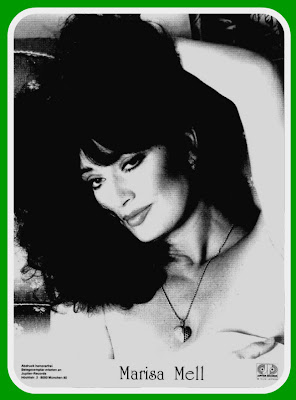 But the story doesn't end there. The heart shaped diamond pendant around Marisa Mell's neck is a rather strange object. The question remains if this necklace belonged to Marisa Mell from her private collection (maybe given to her by a lover???) or that she fell in love with the necklace after the production of the movie and took it home. I believe that the necklace was from her private collection and that she wore it during the shooting of the movie. Fact is that almost ten years later the heart shaped diamond pendant resurfaced again around her neck in public. As many of you know from a former entry, Marisa Mell has made a single called "Slave of Love", produced by Ralph Siegel. To promote this single she made an autograph card with a picture from a sexy photo shoot for a skin magazine. And around her neck the pendant appeared again. This time giving a completely different message from an older sexual mature women seeing herself as a "Slave of Love". Unfortunately for Marisa Mell, this carreer was very short lived. And so the heart shaped diamond pendant disappeared never to be seen again. 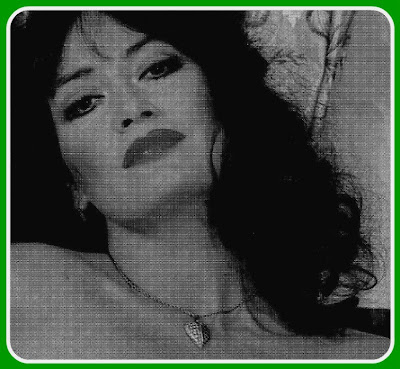 Posted by Mirko di Wallenberg at 8:40 AM 2 comments:

Why should I go see this movie in the cinema when the trailer tells the complete story?