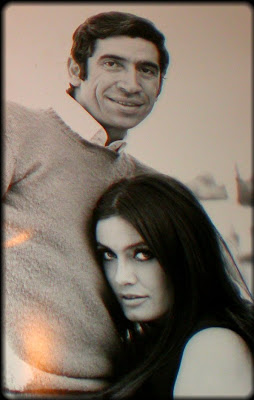 On March 19th 2011, according to IMDB, one of Marisa Mell's major protagonists in her life, has died at age 85 in Rome, Italy. Pier Luigi Torri is a name that for ever will be connected to Marisa Mell's life in good but more often in bad ways. They were at that time during their romance (!)between 1967-1971 known as the "Number One"-couple in reference to the hot spot nightclub "Number One" in Rome. The nightclub was partially owned by Torri and some of his friends, connected to the high society of Rome but also, often to the darker regions of society, in Italy, it means "organized crime". The romance and some say marriage, which probably took place in Barcelona, Spain, around 1969, was to say the least very tumultuous with a lot of drama, violence and in the end a miscarriage for Marisa Mell in 1969 during the Cannes Film Festival. The couple was "gefundenes fressen" for the Italian and world yellow press. Marsia Mell has often stated that she was regularely hit by Pier Luigi Torri. Nevertheless she stayed with him untill his drug connections blew up in his face and he had to escape to London, England in 1971, in an attempt to stay out of jail. The relationship with Pier Luigi Torri had a major impact on the life of Marisa Mell, which in my opinion, she never recovered from and which derailed her entire life and future because in her heart she really loved the man as her soul mate. For Pier Luigi Torri she was the trophy movie star and taken for granted. After his jail time, Torri returned back to Italy, Romy and started a new family resulting in a son and a daughter. Pier Luigi Torri survived Marisa Mell for 32 years! 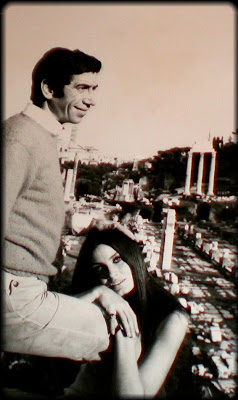 More in detail can be read on this Marisa Mell blog in previous entries!

/
Thanks to André Schneider for the information about the death of Pier Luigi Torri!
Posted by Mirko di Wallenberg at 5:00 AM No comments:

And now...a commercial break with Lambretta! 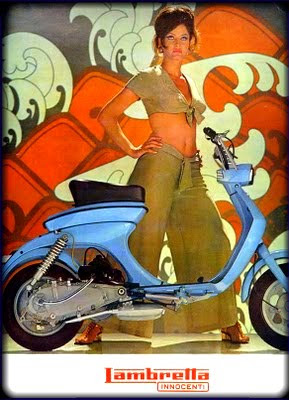 At the moment I am on holiday for several weeks on the island of Tenerife, one of the Canary Islands, situated in the Northern Atlantic ocean, about a 100 kilometers from Marocco. The Canary Islands belong to Spain. Although it is still early spring in the northern hemisphere, the temperature on Tenerife is between 25-30°c with a steady cooling ocean breeze. In short the weather is phantastic not only to sun on the many beaches of the island and swim in the sea but also to do trips all over the island with cabriolets, jeeps and...motor scooters. And that I find quite remarkable that after more than 40 years after the heydays of the motor scooters, especially in the southern countries of Europe like Italy, Spain and Southern France, they are still very popular with the youth as a means of easy transportation. You would think that the youth are aiming now a days at having a car as soon as possible but clearly that is not the case they still appreciate a lesser means of transportation. So the motor scooter is still very prominent visible in the streets and along the beach promenades. 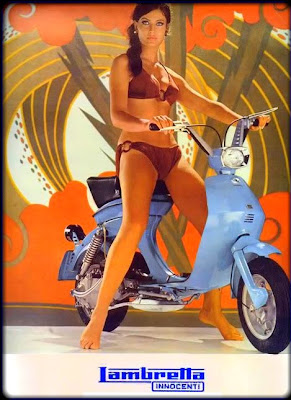 During the second half of the 60's when Marisa Mell took residence in Italy she did several photo shoots for the Italian motor scooter brand "Lambretta", manufactured by the company "Innocenti". She was not alone in advertising for this brand. Almost every known movie and record star was one way or another connected to the motor scooter craze from that moment. It was just "the" way of transportation for the teens and adolescents during hot summer days and nights. From today's point of view these photo commercials look rather silly and very staged but a motor scooter is not really an easy object to market. 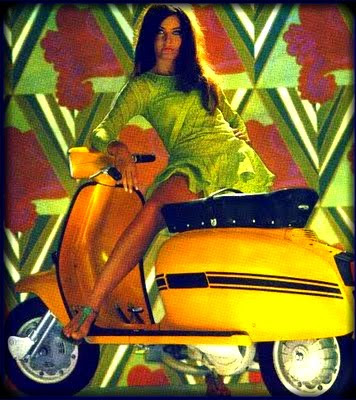 Personally I like the photo commercial for the "Vespa" motor scooter much better. Although shot in the same vain as the "Lambretta" commercial it is a little more glamorous and tends more to the personality of Marisa Mell than the other two photo's but that is a question of taste! And now back to "La Dolce Vita"!
Posted by Mirko di Wallenberg at 2:43 PM 2 comments: 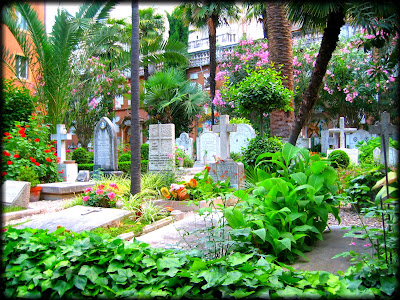 In the live of most women there comes a time when they want to experience the blessed state of pregnancy and joys of motherhood. Although Marisa Mell was known as a vamp, sex kitten or man eater, Marlies Moitzi was not! She loved to be at home far away from the spot lights and the red carpets and do homely things like cooking, painting, reading in a cozy chair in front of a fireplace, be with friends... So it is not strange that Marlies Moitzi also wanted to find unconditional love, marry a faithfull man and become the mother of his children. Although her profession as Marisa Mell did not allow her to have much time as Marlies Moitzi, in her heart she still longed for this normal life! During the 60's, Marisa Mell thought that she had found the man who could give her the family life of a common women.

Sadly for her, Pier Luigi Torri, an Italian playboy and womenizer, could not and would not how hard Marisa Mell tried to live her life according to his rules and whimps. He wanted the adored glamorous beautiful Italian movie star Marisa Mell as his partner, not the Austrian girl from Gratz civily known as Marlies Moitzi. After some very violent and tumultuous years at the end of the 60's Marisa Mell got pregnant from him but lost the baby during the Cannes Film Festival. (More about that pregnancy and her life with Pier Luigi Torri as the "Number One" couple can be read elsewere on this blog). 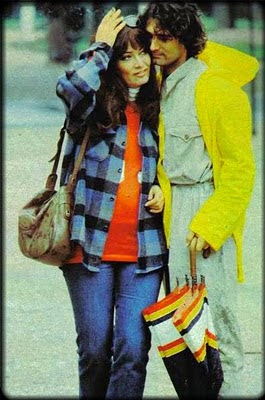 Being emotionally drain from that relationship and miscarriage Marisa Mell focused the next years of her life on her career by making more than 20 movies untill 1977. In November of that year the paparazzi were able to catch Marlies Moitzi being visabley pregnant during a walk in the park in Rome on a rainy sunday afternoon in the company of fellow actor Gianni Macchia. (More about this part of her life can also be read elsewere on this blog) At the end of that entry it was not clear what has happened to the baby or the pregnancy of Marlies Moitzi. Now we know! 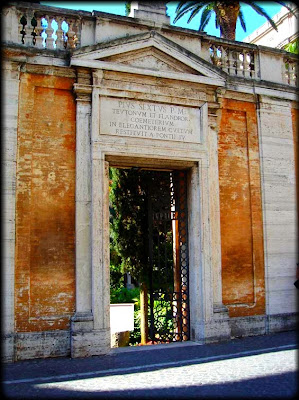 On November 26th 1977 Marlies Moitzi gave birth to a baby girl in Rome, Italy. She named her child "Louisa Erika" in reference to her mother Louisa who was a major and stable influence in her life at that moment and her life long best friend the Austrian actress and writer Erika Pluhar who would become in later years her tower of strength when her movie career came to an end and poverty settled in. Marlies Moitzi never revealed who the father was of this baby. Several names were mentioned in the yellow press but nothing got confirmed. Sadly the baby girl was not strong enough to be viable on her own. She died on the same day leaving a desperate Marlies Moitzi behind who had hoped so much to hold this baby in her arms. Several days later the baby girl was laid to rest in Rome at the cemetery "Campo Santo dei Teutonici e dei Fiamminghi" or "Teutonic Cemetery". 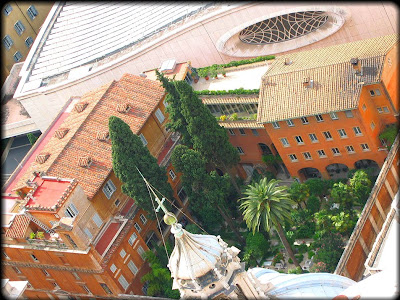 This cemetry is situated in Rome in the south of the Vatican state. On the original grounds the Roman emperor Nero had build his circus. After the fall of the Roman Empire Nero's circus was destroyed and replaced around the year 8oo by the present cemetery. The founder of the cemetery was Charlemagne, emperor of the Holy Roman Empire, with the blessing of Pope Leo III. Only subjects of the Charlemagne who died in Rome could be buried on this cemetery. Untill this day it is still the rule that only German or Dutch speaking people from countries like Germany, Austria, Switzerland, Holland or Flanders can be buried on this cemetery. Even visiting the grounds is not simple! The pope's private guards the "Swiss guards" are still guarding the gate to this cemetery only allowing entrance to Germans, Austrians, Dutch or Flemish people, in other words, people originating from countries once important members in the Holy Roman Empire. Thanks to André Schneider for the information.

Posted by Mirko di Wallenberg at 5:25 AM No comments: