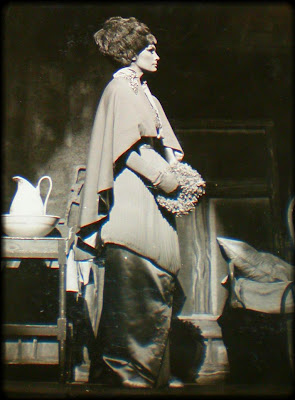 Since the inception of the Marisa Mell Blog several entries have been dedicated to the musical "Mata Hari" from producer David Merrick, directed by Vincente Minnelli, starring Marisa Mell and "Bonaza"-star Pernell Roberts. Fresh from the success in movies like "Le Dolci Signore" or "Danger: Diabolik!" in the second half of the 60's the powers that be found it time to transfer Euro-beauty Marisa Mell from Italy to the USA in the wake of other Italian sirens like Sophia Loren, Gina Lollobrigida, Claudia Cardinale, Virna Lisi.... The fact that she was not Italian but Austrian did not matter. Her appearence was all Italian-like with thick auburn hair, big emerald green eyes and lush voluptious lips. What could you ask for more??? After several appearences in magazines like Vogue and McCall's introducing her to the American audience it was time to throw her into the deep end of the showbizz waters, ready or not! 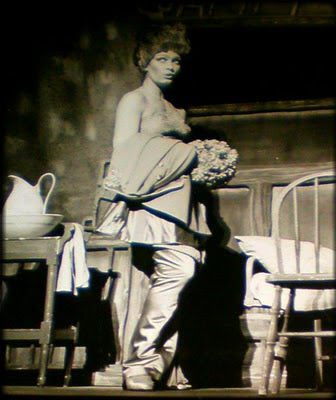 And ready she was not! Being trained as a theatre and movie actress she had no idea what it required to be a musical actress. Although there is a lot in common between the two disciplines its major requirement is that, next to being a stage presence, you need to be trained as a musical singer. Not a common singer of pop songs or classical pieces but in the specific technique of using your singing voice on stage while acting. So you need to master two disciplines. And Marisa Mell was no singer. That was a talent she had not! She could dance, sword fight, ride a horse,... but singing she could not! Compare the 1995 re-recording of the musical sung by professional musical singers with the 1967 bootleg recording then you know what I mean. So the whole adventure in the USA turned into a disaster for her. After a try-out in Washington, D.C., the whole show was canceled and never got to Broadway much to dispair of Marisa Mell. She had high hopes that this production of "Mata Hari" would be her ticket to the USA and showbizz. It did not! She came back one year later very disappointed and desperate. People close to her mention that in fact she never recovered from it and was scarred for life! Others clame that this gave her carreer a whole other direction and was the beginning of her downfall as an A-list actress, once starring opposite Marcello Mastroianni in "Casanova 70". 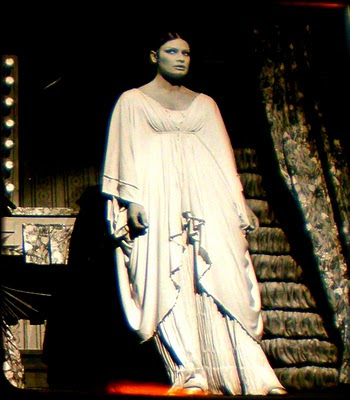 "Mata Hara" is only a footnote in the musical dictionaries mentioning the musical flop that it was. So there is not much material available on the memorabelia market. Luckily there is the bootleg recording of the production with the voices of the entire cast, including Marisa Mell, speaking her role as Mata Hari with a singing pitch! We are still waiting for original film footage of the production to appear. And now there are these pictures. In my knowledge they have never been published before in any magazine in the world since the days of the production. They show Marisa Mell during a dress rehearsel of the musical on stage. From today's point of view and even from the 60's point of view they are horrible. Marisa Mell had a very sexy slime figure in those days but by the looks of it the producers did everything to cover and distract from it. They are big, dark, depressive and formless cloths. Maybe they should have reflected the poverty of the character or the dispair from World War I. Even Audrey Hepburn in "My Fair Lady", starting out as Eliza Doolittle, the poor flower girl in Victorian London, had more beaufitul cloths than this. If these pictures give some kind of impression of the production quality than it is no wonder that, with everything else we know at the moment, this production was a faillure from the beginning. What is even more a mystery is that these cloths were drawn and made by Irene Sharaff, a 5-time Academy Award winner for productions like West Side Story, The King and I and... Cleopatra with Elisabeth Taylor. Maybe she had a headache the morning when she drew these cloths after a long night of partying and boozing in town? Who knows!
/
The pictures come from the personal archieve of Marisa Mell thanks to Guido from Italy!
Posted by Mirko di Wallenberg at 3:47 AM No comments: 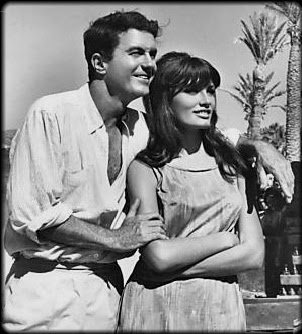 Oscar-winning Hollywood actor Cliff Robertson has died at the age of 88 on September 10th 2011, one day after his birthday! He played a young John F Kennedy in the biographical 1963 film "PT-109" and won an Academy Award in 1968 for his performance in "Charly" as a mentally disabled man. Robertson remained a popular TV and film actor from the mid-1950s onwards. He later found a new generation of fans as Uncle Ben in the Spider-Man movies. His secretary said he had died in New York state of natural causes. "My father was a loving father, devoted friend, dedicated professional and honourable man," his daughter Stephanie Saunders said. "He stood by his family, friends, and colleagues through good times and bad. We will all miss him terribly." Robertson was blacklisted by Hollywood for several years after blowing the whistle on a studio chief who was subsequently accused of embezzlement. In 2002, Robertson was cast as Peter Parker's kindly uncle Ben in Sam Raimi's adaptation of Spider-Man. Despite being killed in the first film, he appeared in flashback in the following two movies. Marisa Mell fans will fondly remember Cliff Robertson in the 1965 Basil Dearden directed spy-spoof movie "Masquerade".
Posted by Mirko di Wallenberg at 12:15 PM No comments:

"Death Will Have Your Eyes!" Reprise 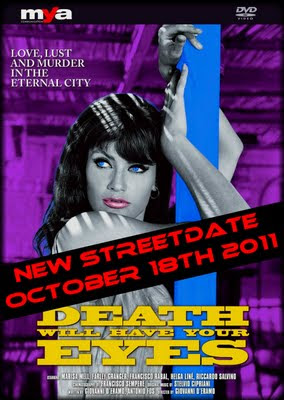 Posted by Mirko di Wallenberg at 11:55 PM No comments: 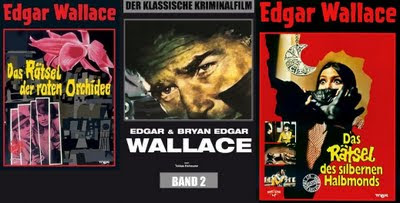 As a Eurocult fan I often dream about the perfect book regarding my passion! Once in a decade that book does come along and you've got to have it no matter what price! In the last decade it was Tim Lucas' opus maximus about Italian movie maestro "Mario Bava". Although this decade is still young it will probably be the book about "Edgar Wallace" written by German author Tobias Hohmann. This book has it all about the German movies based on the crime novels of British writer "Edgar Wallace" and those by his son "Bryan Edgar Wallace"! The book clocks at a whopping 866 pages full of... well, everything you ever wanted to know and see about these German cult movies of the 60's and early 70's. The next examples of pages should give you quite a good idea what I am talking about. And when you know that some of the movie memorabelia have been given for this book by some very die hard German fans you know that you are going to see many items never been seen since the release of the movies so many years ago! 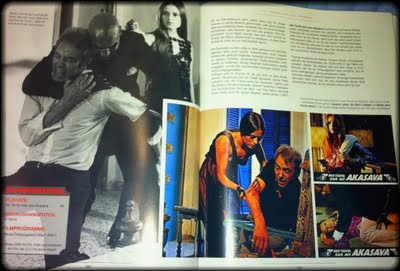 And of course, the fact that Marisa Mell appeared in two movies of the series "Das Rätsel der roten Orchidee" and "Das Rätsel des Silbernen Halbmonds" is the icing on the cake! 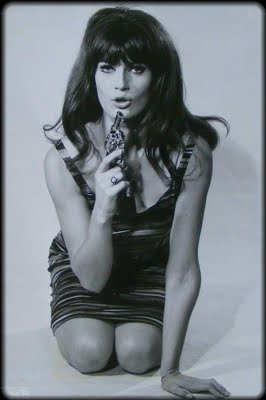 Thanks to Holger Haase for pointing this one out! Holger has a phantastic blog about the Edgar Wallace-movies: http://krimifilm.blogspot.com/
Posted by Mirko di Wallenberg at 3:31 AM 2 comments:

"Anyone Can Play" with Netflix! 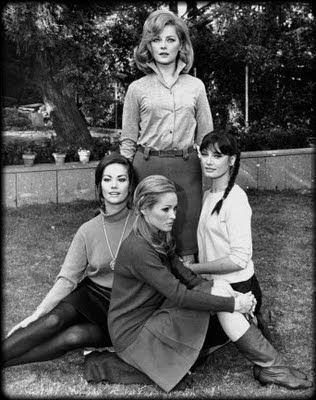 One of the lost movies of Marisa Mell, never having had an official VHS or DVD release, made in 1968 with other Eurostars Ursula Andress, Virna Lisi and Claudine Auger is the movie "Le Dolci Signore" or "Anyone Can Play". This comedy has been hardly ever seen since those days except on some local television stations during the red eye broadcast hours and mostly in a cut version. 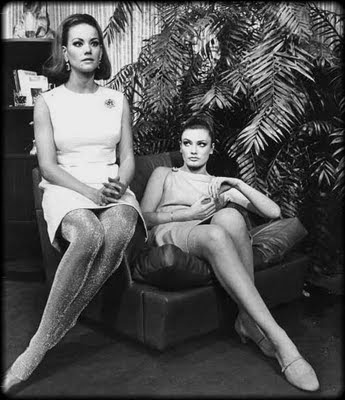 So I was very pleased to hear from Marisa Mell fan "Dan" from Chicago that the movie-on-demand "Netflix" in the USA made this movie avalaible in her catalogue for the American audience. Knowing the quality of the prints and mostly the uncut versions of a movie they use this is really a treat for all Marisa Mell fans to see this movie for the first time in more than 40 years as it should been!

Thanks Dan from Chicage for pointing this one out!
Posted by Mirko di Wallenberg at 11:44 PM No comments: