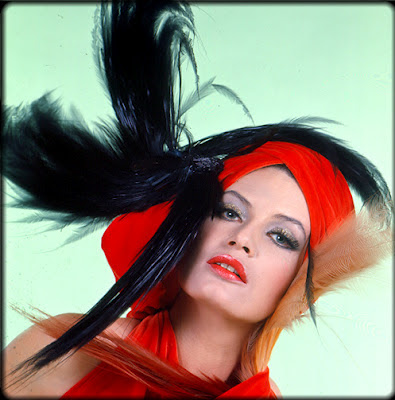 Today on February 24th 1939 Marisa Mell was born in Graz as Marlis Moitzi! Had she survived her illness 20 years ago she would have been 73 years old today! Sadly she did not! Nevertheless a happy birthday, Marisa, wherever you are!
Posted by Mirko di Wallenberg at 2:02 AM 1 comment: 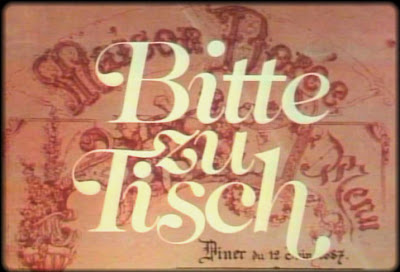 On Sunday March 18th 1977 the Austrian state television ORF broadcasted a culinary programme called "Bitte zu Tisch" presented by the singer-actress-presenter Helga Papouschek. The aim of the programme was to invite guests from showbusiness and culture in general from the German speaking coutries in Europe to talk about their projects, present and past, while eating the meals that they had cooked previously in the studio kitchen. Being state television in 1977 the show was very, and I mean very, formal in its execution. Even the British could not have made a programme more upper stiff lipped than this programme. Starting from the old fashioned title card, even for that time, my god we are in the hip 70's, the producer used as back ground of a menu dating back to 1887 over the very formal talking presenter who hardly dared to move to the very formal cooking of the recipes! Gordon Ramsey or Jamie Oliver are decades away. If they used talking dummies nobody would have noticed it! 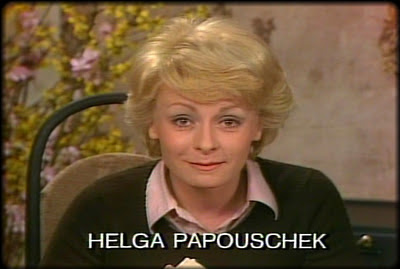 Luckily for Helga Papouschek this programme is only a blip on her resumé as a presenter. In later years after the year 2000 she became quite famous in her career as opera and operette singer in Vienna, Austria and the German speaking countries untill this day she is highly respected for her krafts. She has probably forgotten all about this show and that is fine, so would I if I had presented it like she had. 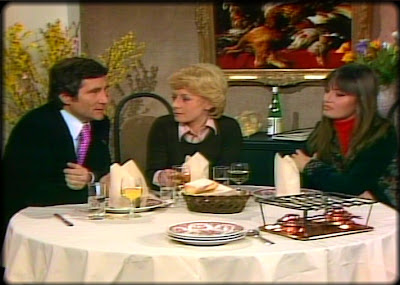 On this March 18th 1977 show Helga Papouschek had as guest next to Marisa Mell the German devil do all actor-singer-composer Freddy Quinn. Freddy Quinn has a career spanning almost 55 years and is still highly respected in Germany, although in recent years after the death of his beloved wife for more than 50 years he has semi-officially retired from show business in Hamburg, Germany. 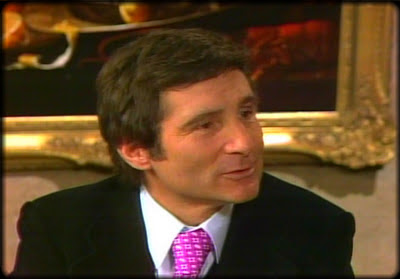 And then there is of course the one and only Marisa Mell. People who knew Marisa Mell more privately told that she was a rather good cook and knew what she was doing in the kitchen. Guests enjoyed her food very much. The presenter mentions at the beginning of the show that a previous guest another famous Austrian actor Werner Pochath called a recipe "Scampis Marisa" which of course flattered Marisa Mell hearing this that a recipe was called after her. 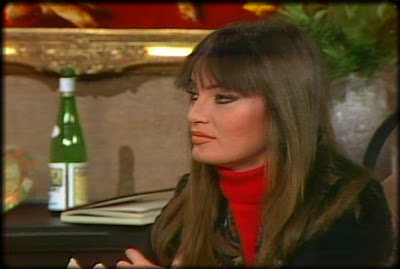 The show meanders on from one guest to the other and back not very well structured but still very formal. Freddy Quinn is in his element almost kicking on the formality of the show, but Marisa Mell is at moments very uneasy and tries to fit in but hardly succeeds. Untill she gives up and starts adopting also the eating formality by being over polite at the table in trying to eat with chop sticks what has been cooked by Freddy Quinn a chinese dish called "Tan Guan", whatever that may mean! Never heard of it! 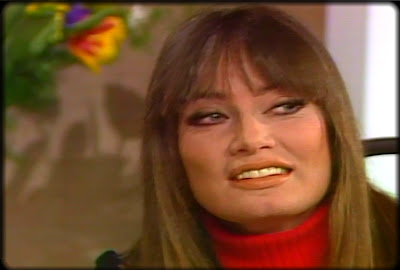 Then it is time for Marisa Mell to go to the kitchen and cook her recipe. It is called "Heidensterz" a recipe from the part of Germany called Schlesien or Austria called Steiermark. At the end of the entry you find the German version of this recipe. Please do not ask to translate this recipe into English! Hit it, Marisa! 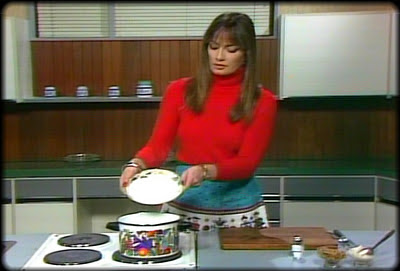 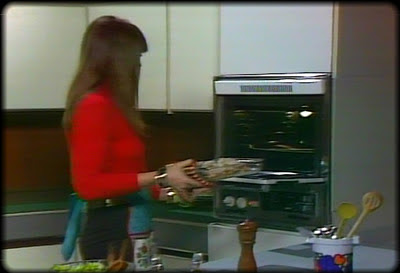 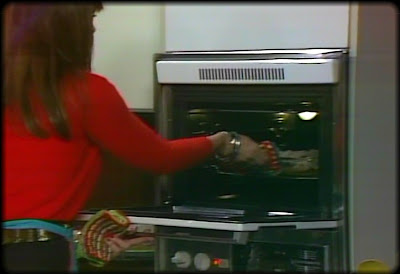 And then it is back to the table babbling about the careers of both guests! Who could top the other in having the interesting show career: Freddy Quinn or Marisa Mell??? Let's hear what Marisa Mell has to say about that! 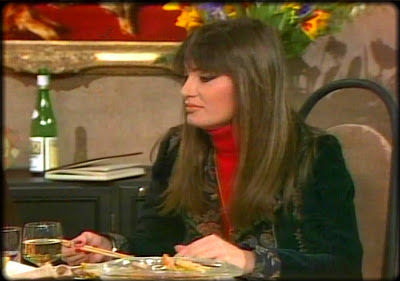 We learn from Marisa Mell that she was in the muscial Mata Hari on Broadway for 6 months performing 8 times a week. It was a hell of job but Freddy Quinn said with a lot of knowledge that "she was now a Broadway star, the highest regard that an actress could achieve in the US". Unfortunately this was complete nonsenses from Marisa Mell  and Freddy Quinn because a) the show never did get to Broadway but was tanked in Washington DC after one performance being that bad and b) untill this day being an Oscar winner is still the heighest acclaim an actress can achieve, maybe equiled by a Tony Award for theatre performances! Luckily the internet did not exist at that time otherwise the presenter would have blown this away as a clear lie! 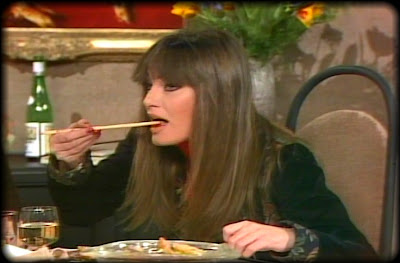 And then suddenly the show becomes really interesting for Marisa Mell completists. She tells the presenter that she loved making "Danger: Diabolik!", has never seen it since the première of the movie, and is one of her favorite movies to this date. The programme was taped around the 20th of February 1977 because Marsia Mell mentions that her latest movie "Casanova & C°" with Tony Curtis will have its world première in Vienna, Austria, on February 25th 1977, one day after her birthday! And for me unkown information untill now was the mention that Marisa Mell was planning on starting her next film in the summer of 1977 a movie with Anthony Quinn in Arabia, did she mean Saudi Arabia and Turkey. Filming would take almost up to a year. The project never came into existence for Marisa Mell. Anthony Quinn did make a movie in 1977 called "The Message" filmed in Arabia. How, and more importantly, if Marisa Mell was really connected to this movie, is unkown. Maybe she heard this through the grape vine in Rome that Anthony Quinn was going to shoot this movie and needed an excuse for the show to show that she was still in demand by producers to star in movies with other older Hollywood stars? Who knows??? Fact is that the career of Marisa Mell was already in decline in rappid tempo. Her next project would be the Helmut Berger starrer "La Belva col Mitra", famous now for her brutal rape scene and then there were some TV-projects. So no big Hollywood or other movie projects! Reality check for the once highly demanded star! What is also a dead give away that Marisa Mell was not very rich anymore is the way she dressed for this show in a plain red pullover and dark vest. Nothing glamours here or Italian high fashion that she once wore with great class at the beginning of the 70's, only 7 years previous but probably an eternity for Marisa Mell. 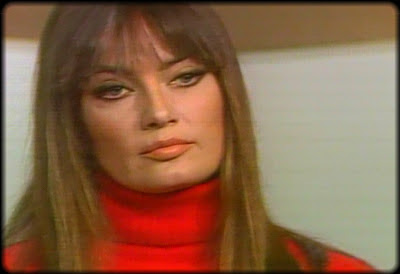 Marisa Mell lost in thought after the taping of the show: "God am I glad that this torture is over! If I forgot why I escaped to sunny cheerfull Rome, Italy, now I do remember why! Never ever again!"
/
As alway a big thank you to André Schneider for pointing out the existence of this programme with Marisa Mell. Thanks Buddy!
/
If you like to cook the recipe that Marisa Mell made in this programme this is the German version of it: