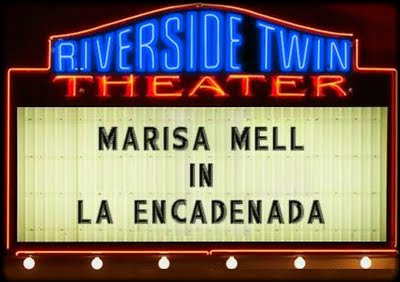 While in Paris (France) last week and the beginning of this week, I was walking one night along the Boulevard de Strassbourg. During this walk I was happy to see that some traditions have not (yet) died out in our present day society! What am I talking about? Well, along the Boulevard there is a nice little cosy theatre, as there are still many in Paris, but this one still had a big old style marquee on its front wall like in the old days with the name of the actress/cabaretière on it in bright big lights together with the name of the programme that she was bringing. In the last century, theatre and movie marquees were "the" way to announce a programme. Sadly, when a lot of theatres and cinemas were replaced by modern movieplexes and big concrete theatres these often beautiful crafted marquees disappeared to be replaced by dull displays. 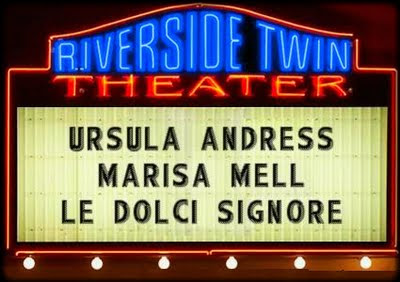 So during my walk I wondered what it would be like to see a Marisa Mell film on a movie marquee during the end of the 60's and the beginning of the 70's when these were still around. Unfortunately, to my knowledge, there excist no pictures of these movie marquees with a Marisa Mell movie on it but thanks to the magic of the internet I created these marquees to get a sense what they might have looked like in the past! 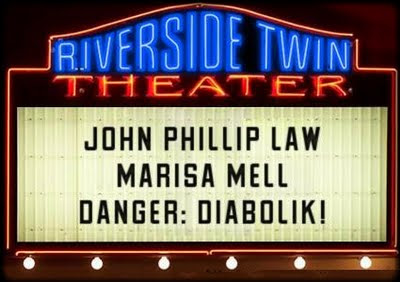 Posted by Mirko di Wallenberg at 3:45 AM No comments:

Meet me in Paris! 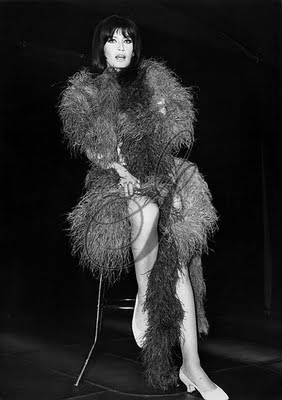 Today I am leaving for Paris (France) to take a little break untill next week. So I found it quite appropriate to publish for this entry a beautiful rare behind the scene picture of Marisa Mell during her stay in Paris in 1967 in the month of February during her shoot of the movie "Le Dolci Signore" with other Eurostars Ursula Andress, Claudine Auger and Virna Lisi. The picture is dated February 23rd 1967. It is part of the Granger Collection hence the watermark on the picture!
Posted by Mirko di Wallenberg at 12:58 AM No comments:

Graz (A): a city with a short memory?

Last week I got a nice letter from a fellow "Marisa Mell"-fan Jochen. Nothing unusual here except that this fan is living in Graz, Austria. As many of you know, who are following this blog for years, Graz was the home and birth town of Marlies Theres Moitzi, before she became the actress Marisa Mell. She lived together with her mother in this town, among other places at the "Trondheimgasse 12", untill she went to Vienna, the capital of Austria, to study at the world famous theatre school "Max Reinhardt Seminar", situated on the grounds of the castle "Schloss Schönbrun". In another entry on this blog (dated October 25th 2008) I wrote about Graz "...becoming in 2003 "Cultural Capital of Europe" for that year and the women of the "WOMENT" organisation decided to honor some women from Graz who had some kind of historical importancy for Graz and her history. In honor of these women, the organisation decided to dedicate 23 plates to these women in a project called "20+03". On march 8th 2003, on International Women's Day, these plates were revealed and during April 2003 they were put on the walls at their distinctive places. Each plate of the 23 plates has a different look and color scheme but they all share the same concept so that they have a common feeling and look about them....The text on the plate for Marisa Mell goes as follows: "Zur Würdigung von Marisa Mell (1939-1992)-Schauspielerin - Schön war sie und sie hatte Talent. Sie genoss ihre Berühmtheit und Männer lagen ihr zu Füssen. Ein Traumleben voller Glamour - die Liebe kam zu kurz. Der Film riss, als sie nicht mehr makellos sein konnte. Trondheimgasse 12-Ehrmaliger Wohnort". Now we are almost 10 years later after this project. Jochen wrote me that at the moment this commemorative plaque is removed from the building situated at the Trondheimgasse 12. More so, he tells me, there are at the moment NO other incentives in the city of Graz that remind us of Marisa Mell or Marlies Theres Moitzi as a daughter of that town. He was very sad in noticing that the city has done nothing to honor once one of her famous citizens. She has completely disappeared into the trenches of history as if she has never lived in that town. Which is rather strange to me because Vienna still remembers her by having named a street in honor of her the "Marisa Mell Gasse", together with other famous Austrian people like "Romy Schneider". So I wrote a nice email to the mayor, the city council representitive for tourism and the tourist office asking them what kind of commemorative in Graz there is at the moment in honoring Marisa Mell. The next day I got a nice email back from the city council representitive for tourism confirming that he got my email and would answer as soon as possible. After 5 days I still have to receive an email telling me where in Graz I can find some traces referring to Marisa Mell which would be nice to honor her by putting some flowers there. I wonder how long it will take to answer me and aknowledge that sadly there are no such places in Graz. Maybe that is why it took so long to answer me? I'll keep you posted!

Thanks Jochen from Graz for the information and pointing this one out!
Posted by Mirko di Wallenberg at 1:02 AM No comments: