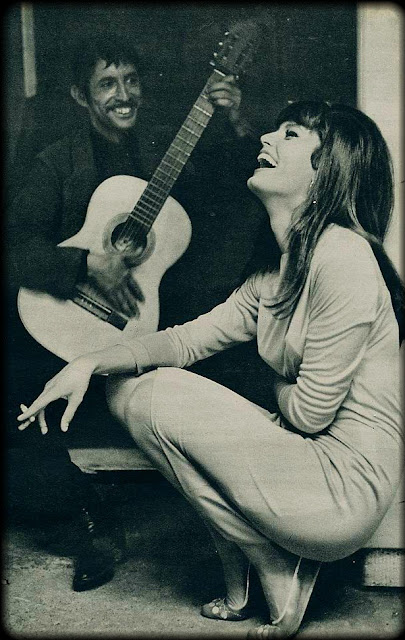 The mid '60's were a very busy time for Marisa Mell rushing from one movie set to the next. Having only worked in previous years on native Austrian or German movies she found herself now working in England. Her international career was taking off. "French Dressing" directed by a still very young but already established tv-director Ken Russell was just the beginning. Her next movie kept her also working in England. It was a James Bond-spoof called "Masquerade" directed by Basil Dearden, who was almost at the end of his movie career but would go out with a bang when he directed a year later hero Charlton Heston in the block buster epic "Khartoum". Masquerade was partly shot in England for the interiors and Spain for the exteriors. There are not many behind-the-scene pictures of Marisa Mell relaxing between takes so this photo series from 1964 makes it extra special. During the shoot in England of this movie Marisa Mell found the time to make a photo shoot for a Spanish glamour magazine together with her co-stars Norwegian actor Tutte Lemkow and the little man of the movie Spanish extra Jose Burgos. In this movie Marisa Mell would also make for the first time acquaintance with French actor Michel Piccoli whom she would meet again a few years later in "Danger: Diabolik!" playing the role of  inspector Ginko, Diabolik's arch nemesis. 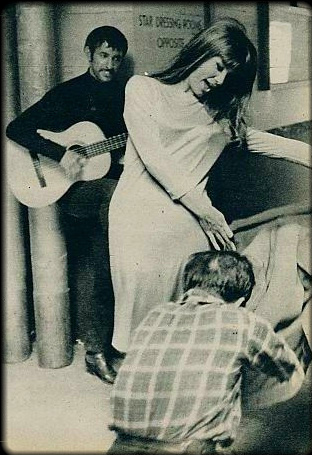 Because it was for a Spanish magazine what better subject to choose than the flamenco danse and playing "El Toro" for the photo camera. Although Tutte Lemkow was a quite accomplished actor, dancer and musician in his time the general movie audience hardly recognizes his name anymore. He worked with a lot of great names from that era like John Huston, Terence Fisher, Peter Sellers and even Steven Spielberg on "Raiders of the Lost Ark". He is still best known for his part as the fiddler in the classic "Fiddler on the Roof". Little is known about Jose Burgos. He only made 2 feature movies, this one, and another rather well known cult movie "The Valley of Gwangi", famous for the Ray Harryhausen stop motion dinosaurs. Then he disappeared completely from the movie scene to be surfacing again in 1995 for an role in a short movie. 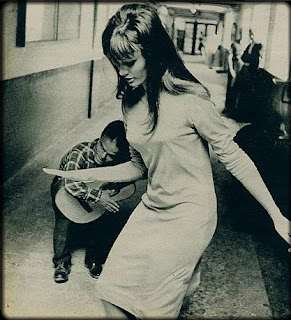 So three actors killing time on a movie set between takes. What is also interesting to know is that during the production of the movie "Masquerade" the production title of the movie  was called "The Ragged Tiger" or in Spanish "El Tigre Andrajoso". After the production the Spanish title became in the end "Agentes Dobles".
Posted by Mirko di Wallenberg at 12:00 AM 2 comments: