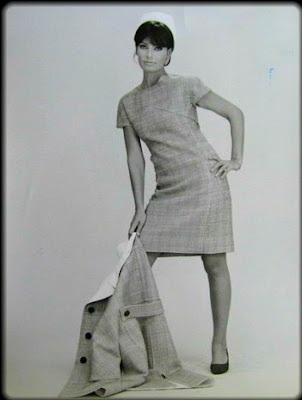 Everyone working in the movie business can confirm that movie making is a very tricky business! It is often a wonder that movies finally do reach the silver screen after all the hassle the producers went through to make them in the end! So much depends on intern and extern factors in the movie making process. In every actor or actress filmography there are dozens of movies which are linked to a certain star where in the end he or she did not appear in because the movie never got made, fee negotations fell through or was replaced in the end by another often more bankable star. That is a law of movie making that every star in the end has to face  if they like it or not! So has Marisa Mell in her career. Everybody following the career of Marisa Mell knows that she replaced the French actress Catherine Deneuve in the movie "Danger: Diabolik!" as Lady Eva Kant the loyal partner of Diabolik during the early shooting process of the movie. Catherine Deneuve and John Phillip Law as Diabolik did not had any chemistery as a couple on and off screen when their characters interacted. According to insiders it was dull beyond belief and would not have worked on screen. Out went Miss Deneuve, enter Marisa Mell. She and John Phillip Law hit it off from the beginning, sparks were flying and sex appeal was oozing of the silver screen the moment they met. Who doesn't remember now the cult famous revolving dollar bed scene in the movie where Diabolik and Eva are making love! But it did not always turn out that well for Marisa Mell. She also had to endure some projects that never got made, was recast in the end or were made at a later time when she was not available anymore for several reasons. One of those project that she was linked to is a movie called "Stiletto". 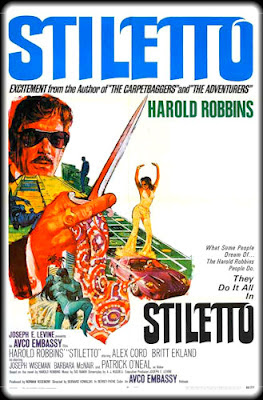 The movie "Stiletto" was based on the 1960 novel written by author Harold Robbins, famous in the 60's for his beststeller books among many others  "The Carpetbeggars" and "The Adventurers". Many of those books were in later years turned into more or less successful movies. In "Stiletto" the story centers around an amoral young Italian aristocrat with a penchant for violence who owes his extravagant lifestyle to the favors of a mafia Kingpin. When asked to silence four witnesses due to testify against the Kingpin, the aristocrat is more than happy to comply in a most brutal manner. Only he did not figure on a special agent, one who helped build a mountain of evidence against the Kingpin, entering the scene into a lethal game of cat and mouse with him where loyalty, honor or debt are not any of the aristocrats motives but only the pleasure of killing. 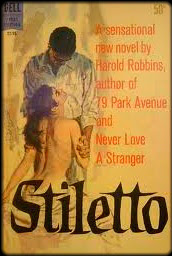 In 1966 the movie based on this Robbins book was to be produced by Embassy Pictures Corporation, a production and distribution company owned by movie mogul Joseph E. Levine. The previous Harold Robbins production in 1964 "The Carpetbaggers" was a genuine box office hit in that year ending on the top spot earning 13.000.000 dollars in revenue. So maybe this movie could repeat the success of this movie! The movie was to be made in Rome, Italy at Cinecitta. Marisa Mell, fresh from her appearence next to Marcello Mastroianni, in the movie "Casanova 70", was cast as Illeana, a role later to be recast by Swedish born actress Britt Ekland. Production went full steam ahead and a lot of money was poured into it! Marisa Mell's wardrobe was made by the most famous fashion house in Italy: The Fontana Sisters! They were the most respected fashion designers at that time working with almost all the famous American and international movie stars starting with Elisabeth Taylor and ending with Princess Grace of Monaco. Their style shaped the fashion industry of that time so dressing up Marisa Mell for this movie as seen on the photo above was a big deal for her. It showed that she was on the right track slowly moving to the top the movie business in Europe and in the end Hollywood would not be far off! The movie stills of this movie were going to be taken by another film legend the photographer Emilio Lari. At that time he was a young photographer breaking into the movie business becoming famous in the same year photographing the movie stills for Barbarella with Jane Fonda! The movie was going to be directed by American director John Berry. John Berry is hardly recognized this day as a name in the movie business but during the 50's-60's he was very famous not for his directed movies but for being linked to the Communist Party witch hunt in America. John Berry could not stand it anymore and left America to live in France! For reasons unknown at the moment to me the production of the movie halted and came to a complete stop in the same year. In the end the movie was to made several years later in 1969 with a complete different cast and production crew. Marisa Mell was already at the top of her fame and was not connected any more to this movie! She was to expensive to be hired.
Posted by Mirko di Wallenberg at 11:17 AM No comments: