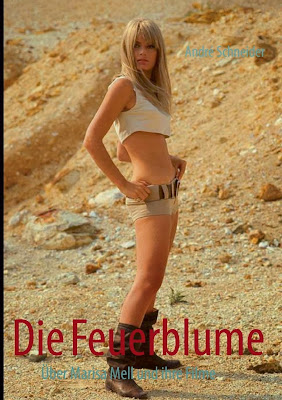 Today is a very special day for the Marisa Mell Blog because I am very honored and proud to announce that the very first biography of Marisa Mell about her life and movies is now available to buy:

"Die Feuerblume" or "The Fire Flower", written by my dear friend André Schneider from Berlin (Germany), is a 354 page book chronocling Marisa Mell's life path from her early childhood days in Graz (Austria) under her civil name Marlies Moitzi to her international stardom in the sixties and seventies in Rome (Italy) and the eventually the world until her premature sad demise in the early nineties in Vienna (Austria).

After 7 years of intense international research André Schneider has written a wonderful book about the cult movie actress Marisa Mell that not only discussies in depth the merits of her movies, her career and her life as a famous Italian movie star but also maybe more importantly sheds new light on some rather obscure facets of her professional and private life that untill now have never surfaced before or have never been discussed before.

This book is a must read for every true movie fan or professional giving a fascinating insight by way of the life and work of the actress Marisa Mell into the workings of a movie career that can progress from the early steps as an aspiring theatre student at a famous theatre school into the pinacle of a movie career to the trappings of showbizz and the jet set life in cities like Rome, Paris, London and New York untill the downfall into obscurity and poverty.

The book is illustrated with more than 130 pictures from Marisa Mell's professional and private life in color and black and white. Most of them have never been published before and will probably never be published ever again!

The text of the book is German but it has an appendix in English, Spanish and Italian together with a complete extensive filmography and list of her theatre work.

The book can be purchased at:

A Kindle or e-book version of the book will also be available in the near future.

André Schneider, an accomplished actor, writer and director, can be reached for all inquiries regarding this book and his work through his own website:

The Marisa Mell Blog will soon have an interview with André Schneider discussing this important book on the life and work of Marisa Mell.

Review of the book by  film connaisseur  and Marisa Mell expert "Prisma" can be found at the Italian Euro Cult Movie site "Dirty Pictures":

http://dirtypictures.phpbb8.de/post146743.html
Posted by Mirko di Wallenberg at 1:01 AM No comments: 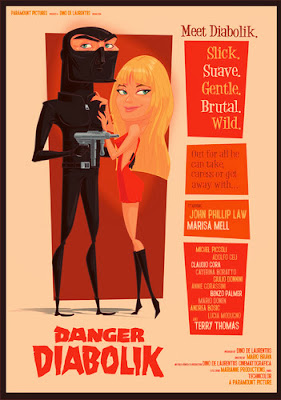 James Gilleard is a 31 year old professional illustrator and animator living and working in London (UK). He has been always interested in art and drawing since he can remember. "The first image" James says "that I ever did that I can remember getting a good grade for was an image from the US television series "Knight Rider".

Marisa Mell Blog (MMB): James, thanks for granting this interview! Can you tell us about your method of working in creating your wonderful art pieces?

James Gilleard (JG): Thank you for having me on the Marisa Mell Blog! My method of working starts with a sketchbook where I sketch characters and tumbnails for layout... This is usually very rough! I then scan the images and draw them with Illustrator - creating a line version of the image before moving to colours. I usually make colour keys for my images depending on the time.

MMB: When you look at you art a lot of pieces are from the 50's, 60's and 70's, often called the "golden era" of modern film making, a time now long gone by in the movies! Why do you like that era so much?

JG: I love the aesthetic of the 1950's, 60's and 70's. This applies to most things like fashion, design, art, architecture, advertising... I focus most of my work within these times. I really like modernism which is in use widely during these periods.

MMB: How did you get to know the movie "Danger: Diabolik!"?

JG: I noticed the existence of the movie for the first time online while researching retro futurism, I think. I came across the poster and photos from the film. I loved the poster of the movie. Marisa Mell looked amazing in her red one piece. She has a very 60's look to her, and her hair looks great too. These were the main reasons I wanted to create the poster that you see above at the beginning of this entry on the MMB.  I used the MMB a lot for reference about the movie and the life and work of Marisa Mell. Then I was invited to take part in the "Red Show" with Planet Pulp. Sadly the poster did not sell that well and the reason I was being told was that it is too obscure.

MMB: Had you ever heard of the name "Marisa Mell" or knew the existence of an actress called "Marisa Mell" for the start of your project?

JG: I had never heard of her before this project or seen any pictures with her as an actress. I made a big list of the movies I like to see with her in it!

JG: Like I said before, I like her hair, wardrobe, make up very much from that era! She is quite a symbol of that era.

MMB: Where can readers of the MMB buy your stunning art pieces?

JG: My art is available through my art agent and also at certain galleries across America like:

MMB: Thanks again, James, for this interview, it is highly appreciated and good luck with your creative career.

James Gilleard has a wonderful blog of his own showing all his phantastic art pieces and creations:

http://www.jamesgilleard.com/
Posted by Mirko di Wallenberg at 12:33 AM No comments: