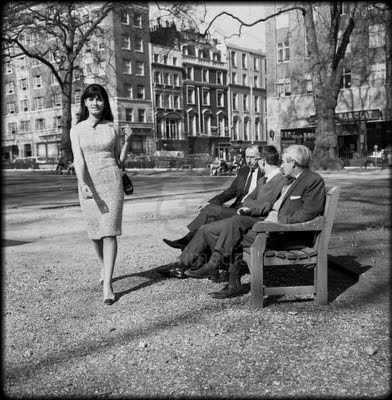 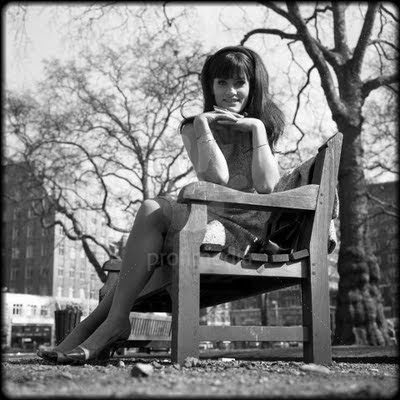 Not for Marisa Mell on March 29th 1965 soaking up the sun in London's Berkeley Square as a guest at the British Film Academy Award dinner promoting her latest movie "Masquerade" for the British market. 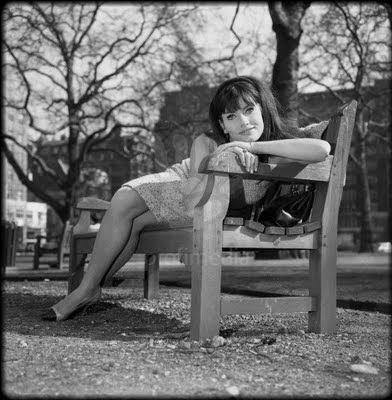 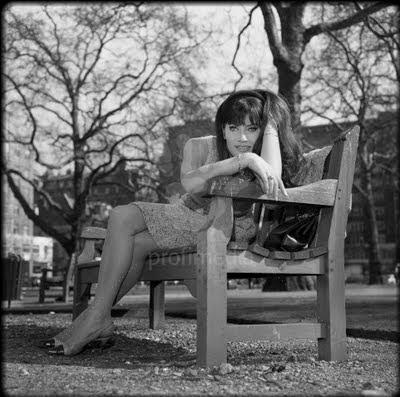 Posted by Mirko di Wallenberg at 9:10 PM No comments: 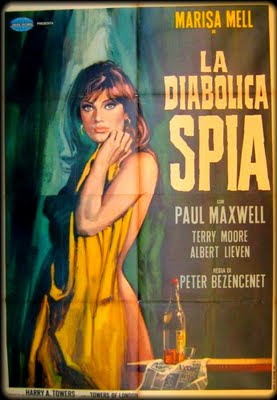 Sometimes other Marisa Mell-fans ask me what my favorite movie poster is of a Marisa Mell movie. Well there are several movie posters that are in my top 10 like the mega posters for "Una Sull'Altra", both versions, the black one and the green one, where Marisa Mell and co-star Elza Martinelli are both depicted in stunning art work and very life like or the giallo version of the movie poster for the excellent "La Encadenada" with another beautiful rendition of Marisa Mell in a vortex of fear. But when you ask me what is in my opinion the best set of movie posters and lobby cards then it has to be the Italian locadine of the 1966 cold war spy movie "City of Fear". This set of movie posters and lobby cards has it all. Stunning art work of Marisa Mell on two of the three movie posters, vibrant colors, action scenes, vintage cars and in the vein of the James Bond craze from that moment a mega gun with a silencer. Can you ask for more? Although the movie was shot in black and white the lobby cards are all re-colored in lively colors almost all depicting a beautiful Marisa Mell as she appeared in the movie! Simply the best set! 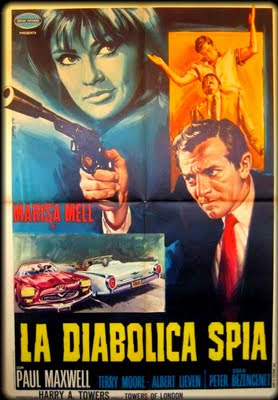 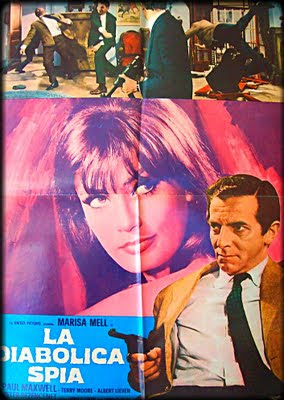 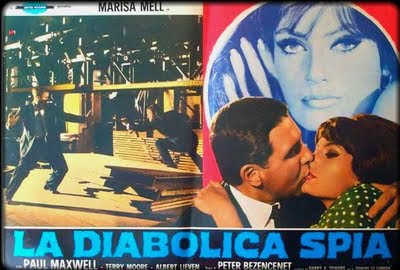 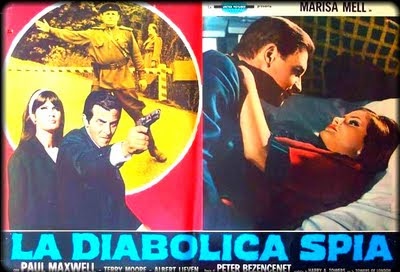 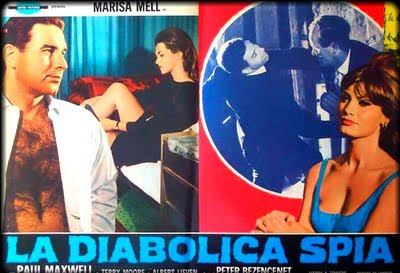 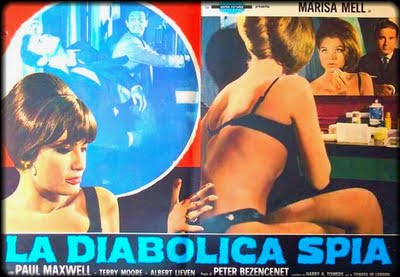 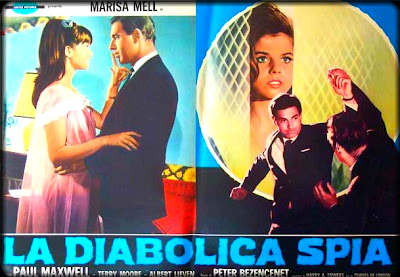 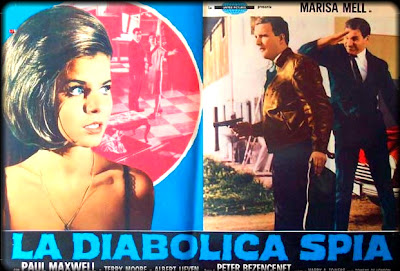 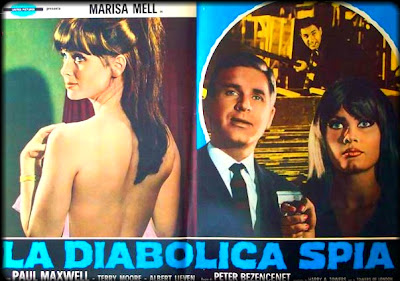 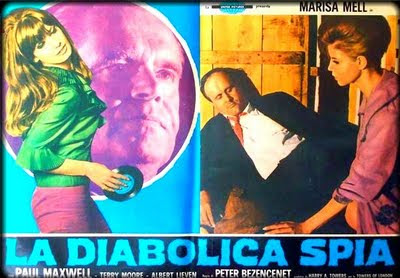 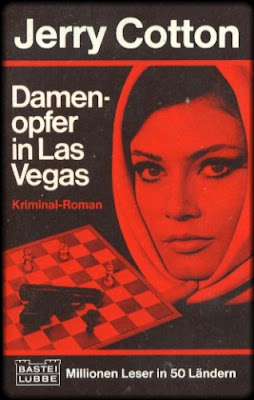 Being a fan of vintage pop culture and cult paraphernalia like books, magazines, comics, movies,... from the early 50's untill the end of the 70's gives you a broad scope of material that can fit into your cult addiction and collections. Very early on crossovers between these paraphernalia became a general rule rather than the exception. A very good example is the crossover between lobby cards of Marisa Mell movies like "Stuntman" from 1968 and "Una Sull'Altra" from 1969 for the covers of the German romanheften issued by publisher Bastei Verlag for their crime series "G-Men Jerry Cotton". G-Man Jerry Cotton from the FBI office in New York is the fictional character in a series of crime novels written by many different writers in Germany. In 1954 the first novel appeared as no. 68: "Ich suchte den Gangster-Chef" in the series "Bastei Kriminalroman". The pseudonym "Jerry Cotton" was developed in 1956 and the first novella with this name on the front-page appeared with the title "Ich jagte den Diamanten-Hai". In 2005 the series reached the 2500th edition. Total circulation since 1954 is about 850.000.000 (!) issues. A group of over 100 authors have written during the past decades for the series which are today still sold in many kiosks and newsagents all over the country. 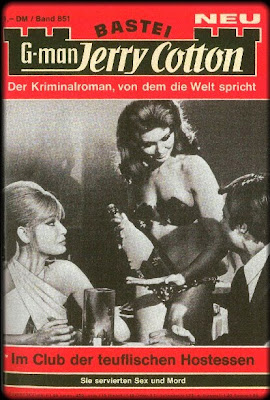 Even though Jerry Cotton novels are considered trivial literature by some people, the FBI agent has a faithful fan community, just like his equally long-lived German science-fiction counterpart , "Perry Rhodan". Several Jerry Cotton novels were adapted as German movies with Hollywood actor George Nader as Jerry Cotton when he was banned from Hollywood in the 60's as a gay actor and boyfriend of Rock Hudson. 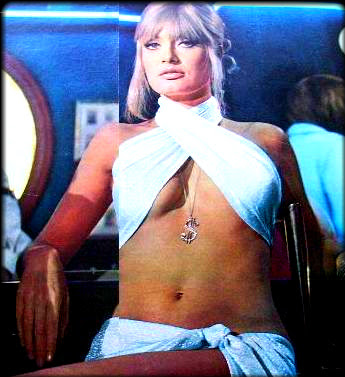 To end this entry we finish with the same cover of the Jerry Cotton Taschenbuch when we started this entry but this time the Dutch version of the cover. 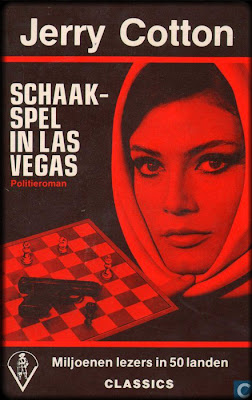