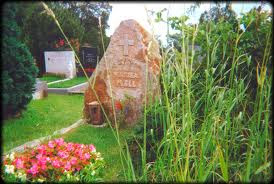 On May 16th 2012 it will be already 20 years that Marisa Mell succumbed to her fatal illness “throat cancer” a result of her heavy jet set lifestyle for years in a deadly mix of continuous smoking, drinking and drugs! For doctors throat cancer is almost always a dead giveaway of having abused the body over a very long period of time with the before mentioned substances! Having fought the disease for several months after its discovery employing all the known cancer remedies her ravaged body could not find the strength any more to fight the ultimate battle. It was enough! It was time to go! Marisa Mell died on May 16th 1992 at 7.30 AM at the Wilhelminenspital in Vienna, Austria, high on morphine to subdue the immense pains of the disease, in complete anonimity from the outside world and above all very alone! No family, no friends, no loved ones were present on her last trip at the time of death! She was only 53 years old! In fact it was not the actress Marisa Mell who died on that day. Marisa Mell had already faded away into oblivion years earlier when she came back out of necessity and poverty from Rome, Italy to Vienna, Austria. No, on that fateful day Marlies Thères Moitzi died, the civilian women behind the film diva “Marisa Mell”, a movie icon for so many men during so many years! Death must have been a liberation for her to finally shed off the heavy burden of living the life of a former glamorous movie star hitting the rocks. When Marisa Mell said goodbye to her friends she always ended before going away with two words:"Ciao Amore!". 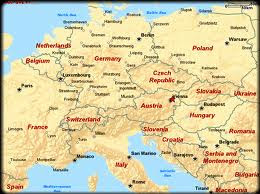 During the month of June in 2002 I was able to visit the grave of Marisa Mell in Vienna. The longing to do so was still there during all those years but in the end something always prevented me to do it! 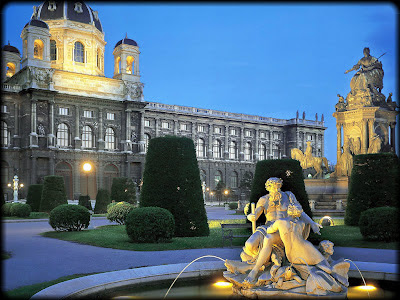 At the beginning of March of that year my employer called me to her office to tell me that during the month of June she and I would be going on a company paid trip to Vienna to be guests at a classical musical festival in the city of music! And the best, I could stay for several days after the festival while she would fly back to attend business. I had started this new job half a year before during a very busy period at the office, working long hours under heavy strain so this was a way of showing her appreciation for me. A complete stay in Vienna paid by the company for several days, all included! Grand! This had to be a sign that it was the moment to finally visit the grave of Marisa Mell. So it happened. 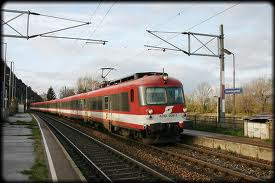 After my professional duties at the music festival and putting my boss back on the plane home I took a train from Vienna to a little village outside of Vienna to the north of the town called “Kahlenbergerdorf”, where the last resting place was situated of Marisa Mell. Finally! 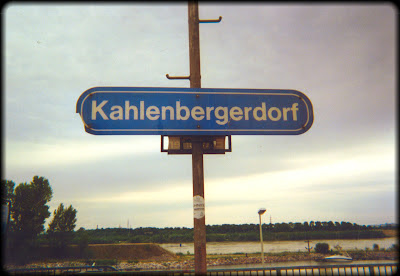 The village is situated on the right hand bank of the Danube, the majestic stream playing such a major part in the history of Austria and its capital Vienna. The origin of the village can be traced back as far as 1133-1166 in an official document. The village is in reality probably much and much older dating back to the early centuries of our timeline. 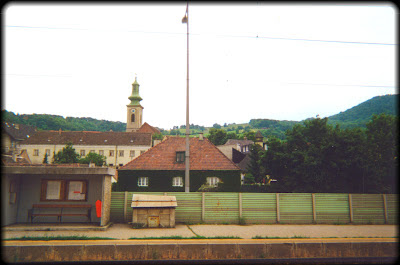 Getting off the train the first thing that you notice facing the village is the bell tower of the church against  the back drop of the surrounding hills completely enclosing the village against the Danube! These hills are part of the greater Wiener Wald. 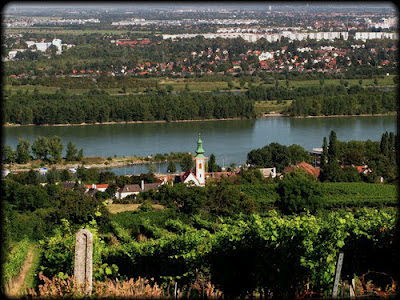 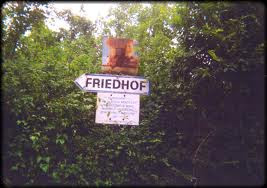 So at the border of the village this sign shows you the way up to the "Friedhof". When I was there I did not noticed it at first so I had to go back on my track to check if I was indeed walking up the right hill to the cemetary. It is a winding road that takes you up all the way through the beautiful surrounding hills with some stunning views of the landscape with hills almost all covered with wine ranks! 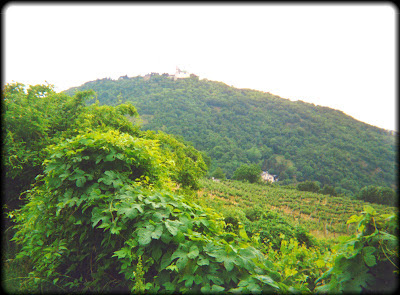 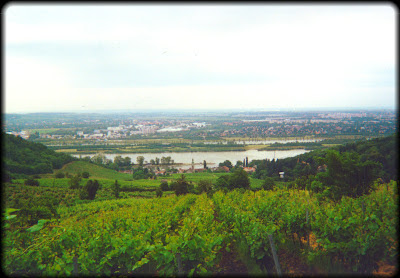 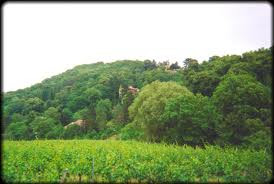 And just when you think "How much further is this cemetary situated on this never ending winding road....?" 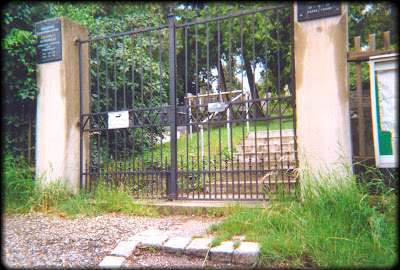 The gate of the cemetary appears in front of you on your right hand side of the road. So this it then! The entrance to the final resting place of Marisa Mell. After so many years of longing to visit the place and reading about it in the Erika Pluhar book "Marisa - Rückblenden auf eine Freundschaft" it was the moment to discover what the place looked like! My first impression was that this entrace looked a lot like a cemetary out of an old Gothic horror movie like the Universal or Hammer ones! And yes, the gate was screeching when you opened it! The only thing that was missing was a sudden burst of lightning or thunder above your head! 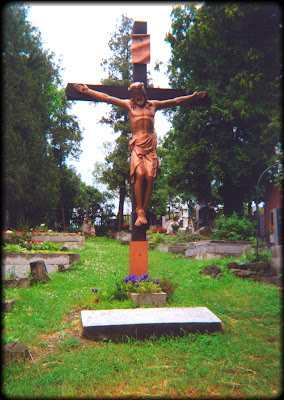 The cemetary has an historic old part and a newer part. Marisa Mell is burried in the newer part of the lot. This massive cross of Jesus Christ is situated at the centre of the old part of the cemetary and is really imposing when standing in front of it! It is made completely out of wood! I always wonderd why the Catholic religion took a cross a means of torture/death or a cross with a man suffering to death on it as a symbol of Love, Hope and Light! So strange! And that was the first thing that came to my mind again seeing this statue rising up in front of me when climbing the slope to see it! 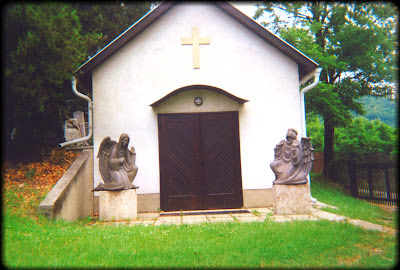 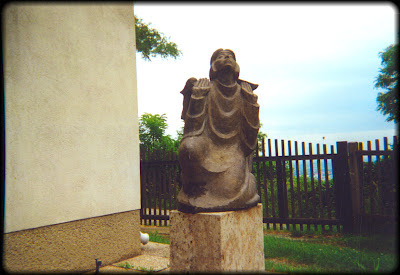 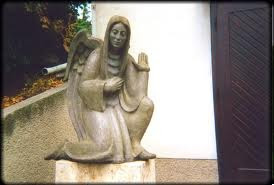 When entering the newer part of the cemetary you can not escape seeing this little chapel with two kneeling angels in front of you! After the funeral ceremony in the village church the priest together with the casket and the mourners go all the way up to the cemetary for the second part of the ceremony, the burial of the deceased. In this little church the priest gives his last blessings to the deceased. The chapel was probably build at the beginning of 1970's as you can clearly see by the sculpted angels done in a typical 70's style. 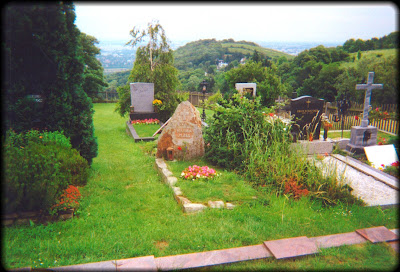 And finally all the way up at the top of the cemetary: the grave of Marisa Mell! Looking around you notice again the stunning view of the surrounding hills and the village Kahlenbergerdorf at its foot with the Danube. In the first few years after her death the grave of Marisa Mell had a simple wooden cross. Marisa Mell had no money so the parish priest payed for the grave lot together with a wooden cross. When it was weathered during the next years by the forces of nature it was finally replaced by a massive pink stone to give the grave a more permanent fixture. 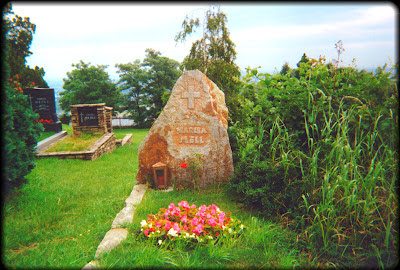 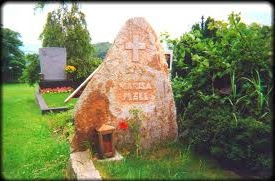 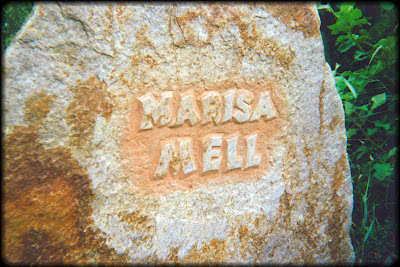 Being on the graveyard it gave me piece of mind have fullfilled a long time dream. Finally being at the last resting place of Marisa Mell, an actress that I have admired for a very long time! A longing came to an end! During my stay at the grave the whole time I did not encounter any visitors! It was very quite and sereen with only the birds singing in the trees and insects swirling around one's head. Luckly it was not a very hot summers day with a burning sun so I was able to sit there in peace for more than a hour before going back to the station and journey back to the city centre of Vienna. During that hour I looked back on the life of Marisa Mell and why it touched me so deeply again and again whenever I think about it. A life with ups and downs, love and hate, money and poverty, friendship and loneliness, health and sickness, victory and defeat... and all the other challenges that life throws at you. Looking back on her life, it made me realize that life offers no guarantees and that you should always enjoy every moment of the now and create good memories for you own future self because you never know when it all might end or how life may throw you into a complete other direction than the present, in a good or bad way. In the end, Marisa Mell's life became a constant reminder off that for me! Finally it was time to go and say goodbye! While going down the hill after that hour of introspect I remembered the caption on the back of the Erika Pluhar book about her best friend written by a journalist of a newspaper after having read her book: "Philosphinnen wollten Marisa Mell und Erika Pluhar werden damals in der Schule. Sie sind es geworden, auf eigene schmerzliche Weise." So true! Arriving at the foot of the hill at the entrance of the village, I looked back over my shoulder towards the top of the hill in the direction of the grave saying quitely to Marisa Mell: "Ciao Amore!".
Posted by Mirko di Wallenberg at 4:09 AM

Thank you so much for this post! The sharing of your experience and photos is much appreciated from afar here in the USA.

Thanks Jeffrey! It was indeed for me a very special occassion to visit the grave of Marisa Mell! Never to be forgotten!

Since I read Erika Pluhar´s Book Marisa Mell I´m intresting on her life. Thank you, for this Post´s.